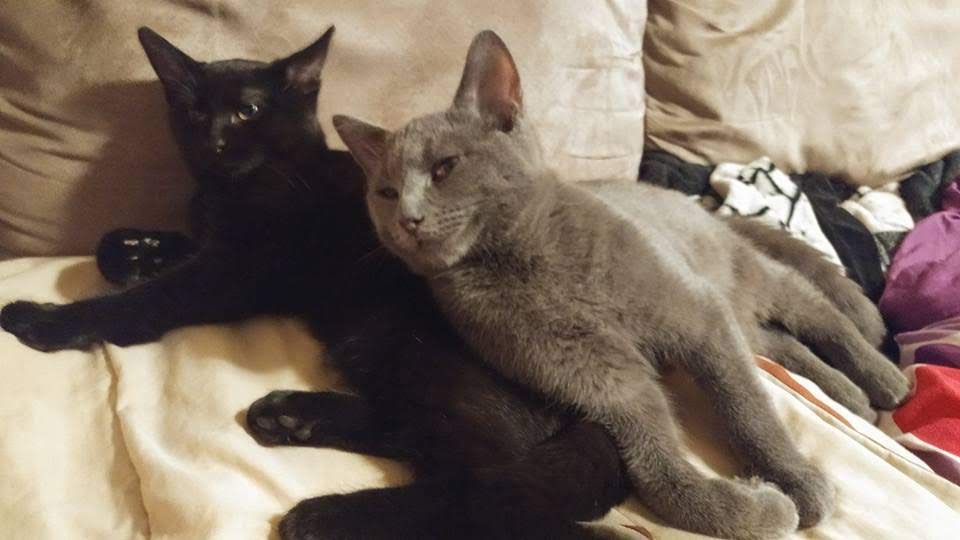 How It All Began

As with many, many people across the globe, I have chosen to extend my family with some furry friends.

It was a long road to get there but here we are.

When my daughter Sheala was growing up she would always ask for a pet. I told her that we couldn’t have pets because I had bad allergies and it would make me sick. Even fish. Then one day almost 2 years ago I was walking to school to pick her up and noticed a poster in the local veterinarians office. They had cats and kittens available.

Our local vet is a fantastic business that often takes in strays and unwanted litters. They make sure they are healthy, spayed/neutered, and then make them available for adoption as family pets.

I asked Sheala if she wanted to go in to take a look at the kittens and of course she said yes.

Once there, we were directed to the back of the clinic and in one of the kennels were two brothers that were estimated to be about 4 months old. We held them, watched them play and explore, and fell in love with them. The clinic offered to give us a discount if we took them both seeing as they were a bonded pair. We said we would think about it and let them know.

Sheala’s dad got home from work around 6:00 that evening and we were home with the cats before 7:00.

They are the coolest and strangest cats I think I have ever owned. But they are awesome pets.

When we first brought them home, Sheala was a little nervous of them and was second guessing her decision to get them. But it didn’t take long before she got used to them and now she doesn’t leave them alone. But they love her just as much as she loves them. Especially Davidson, who we have designated as “her cat”.

We named them Harley and Davidson. Harley is the grey one and Davidson is black with just a few white hairs under his chin. And after almost 2 years we have come to love thier quirky personalities.

Harley likes to perch himself on your back or shoulders while you eat and will sometimes try to intercept the fork as it is going into your mouth. He doesn’t actually eat people food but he’s very curious about it.

Davidson is a total oddball. He is fascinated with plastic bags and any kind of box that he can get into. If there is just one plastic bag in the room he will find it and put it on the floor to sleep on. If he can’t find one to sleep on because it might be full, then this is the time he chooses to chew and sometimes eat the plastic bag. Yes, eat it. There have been a number of times, when cleaning out their litter that I notice small yellow peices of a No Frills bag. He is also about three times the size of Harley. He’s not round, roly poly type fat, but he’s a big boy. Lazyness and eating too much seems to do that in our household.

As If Two Cats Aren’t Enough

Our last pet is Jax. Just over a year ago, I made the mistake of asking Sheala if she wanted to take a trip downtown to the Humane Society to look at all the animals. Of course she again said yes.

It is something we would do on a regular basis when there was nothing else to do and it hasn’t been a problem. Mainly because when we get there most of the dogs are older and although they are so cute and sweet, there was never any animal that we fell in love with.

But of course on this day we get there and the place is full of puppies. There were two, a brother and sister, side by side that were surrendered together. We loved both but the boy was so adorable. I kept saying no. We went up the stairs to look at the cats and when we got back down we went to see the boy again.

His name while he was there was Gopher and he was 4 months old. It turns out that he was just surrendered a few days prior and he had just gone up for adoption on the website about 10 minutes before we asked about him. Sheala was in tears asking me if we could bring him home. How can I say no to tears?

One More? Why Not.

We were lucky enough to be the first ones to want him. As we were filling out the application, two couples came in asking about him and they were told that they were too late. From the time we filled out the paperwork and waited for Chris to pick us up, we had a puppy in about 3 hours.

We renamed him Jaxson Avery Beaumont the third. Jax came from the show Sons of Anarchy; Chris’ favorite show. Jaxson Avery is a character from Grey’s Anatomy; my favorite show. And Beaumont is the name of Joey’s boat in the show Friends which is Sheala’s favorite show. We added “the third” just to be fancy. And it just occurred to me that it is perfect because he joined our family as the third pet.

Jax is just as strange as the cats so he fits right in. He has a wonky paw that is twisted sideways due to an injury from before we got him. His ears never know if they should be pointy or floppy.

He likes to bark at his food dish before he eats, and digs tunnels in the snow with his nose.

So those are my strange animals. We went from a strict rule of having absolutly no pets to having three within two years.

Let me know in the comments below how many pets you have and if they are just as strange as mine.

Also, please subscribe and you will be notified when new posts go live.