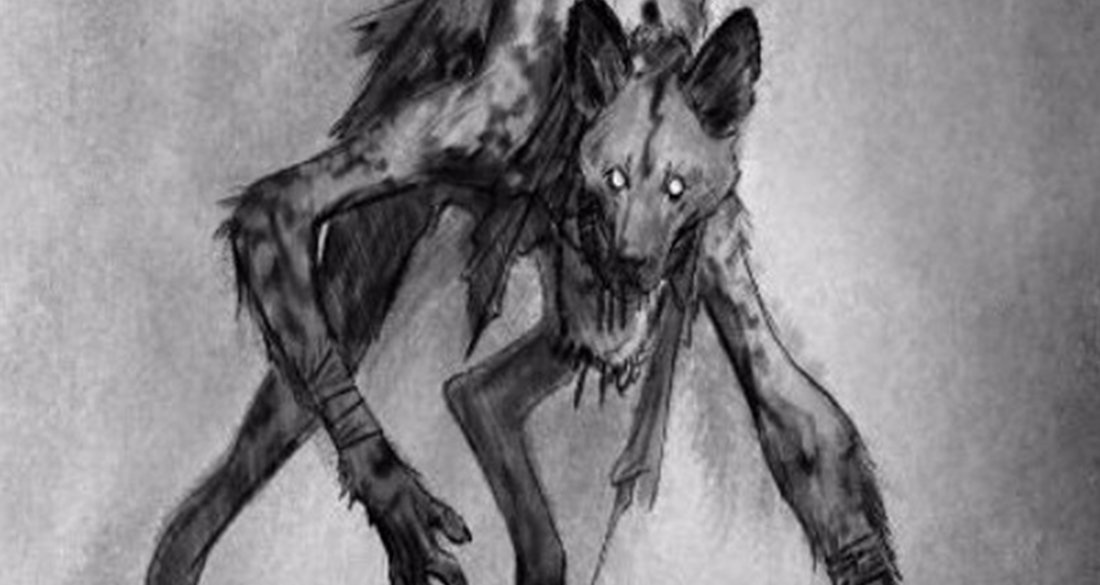 This episode starts out by showing a woman strapped to a chair, gagged and bloodied. A person approaches and pulls out a knife with a wavy blade. A S.W.A.T enters the building and finds the woman in the chair. She motions in the direction that her assailant went and the police enter the next room and find a man trying to leave through a balcony door. With his hands up, he turns around and lit up by the flashlight we see that it is Dean Winchester. The we flash back to one week earlier.

Sam gets an email from his friend Becky from College. Her brother Zach has been arrested for murdering his girlfriend. Becky insists that he is innocent considering he was with her when the girlfriend was killed, in spite of a security video showing Zack arriving home just before the murder.

Becky takes Sam and Dean to the crime scene under the impression that Dean is a detective. They find out that the house was robbed about a week earlier and that the neighbors dog has become vicious since the murder. Once they view the security video, they see Zach’s eyes shine white when he looks at the camera, and know that there is something more to this story.

We watch a man kiss his wife goodbye as he leaves for a business trip. The trip is cancelled and he returns home a few hours later to find his wife tied up and bloody. As he tries to untie her, she begs him not to hurt her anymore. Confused, the husband searches the other rooms for an intruder and finds a man that looks exactly like him, who then knocks him out with a bat.

On their second day of investigating, Sam realizes that the security footage shows “Zach” coming home, but doesn’t show him leaving. They go to the alley to look for any clues that he may have left through the back door. Sam finds a bloody handprint just before an ambulance, with it’s sirens blaring drives past them. And of course, they have to follow to find out what happened.

The ambulance ends up at the home of the business man as he is being put into a police cruiser. Dean asks some questions and discover that the story is eerily similar to that of Zach’s story. They come to the conclusion that they are dealing with a shapeshifter. Something that can make itself look like anyone. They find another blood trail in the alley behind the crime scene that seems to disappear, until they notice the sewer grate below them.

When they explore the sewer system they find some skin and blood that is possibly shed from the shapeshifter, just like a snake. Just as they are about to investigate further, Sam gets a call from Becky. She has found out that Dean is not a detective, and she is not happy. She tells Sam that she doesn’t want his help anymore. But that doesn’t stop them.

Further into the sewer they find what they think is the shapeshifter’s lair when suddenly they are attacked by the creature still in the shape of the business man. It manages to escape them onto the city streets. They split up to look for it and then meet up on a city block corner, neither one finding the suspected shapeshifter. They cross the road to head back to the car and as a car passes in front of Dean, the beam of the headlight show his eyes are that of the shapeshifter. It doesn’t take long for Sam to realize that it is not his brother and confronts it. But just as quickly, the creature knocks him out with a tire iron.

Sam wakes up tied to a beam in the sewer. The shapeshifter tells Sam that Dean is jealous. It can somehow access Dean’s thoughts and memories and shares them with Sam. He resents Sam for having opportunities like going to college when he had to stay with their dad. He also says that he’s going to pay a visit to Sam’s friend Becky.

Becky and the Dean imposter are talking and having a drink while Sam is trying to get free of his ropes. As he tries, he hears Dean waking up. Dean gets out of his ropes and helps Sam with his and is listening to Sam’s theory that the shapeshifter needs to keep the person that he turns into alive in order to create a psychic connection. Meanwhile at Becky’s house, the shapeshifter tries to come on to her and she shuts him down quickly. She gets scared and tries to call the police but it knocks her down and ties her up.

We are then faced with the opening scene of the woman strapped to a chair, tied and bloodied. The S.W.A.T. team finds the shapeshifter trying to escape through the balcony door but it throws the knife and one and karate kicks another. It jumps off the balcony, does a barrel roll on the grass, and runs away dodging bullets. It returns to its lair in the sewer and sheds it’s Dean skin.

We are then faced with the opening scene of the woman strapped to a chair, tied and bloodied. The S.W.A.T. team finds the shapeshifter trying to escape through the balcony door but it throws the knife and one and karate kicks another. It jumps off the balcony, does a barrel roll on the grass, and runs away dodging bullets. It returns to its lair in the sewer and sheds it’s Dean skin.

After Sam and Dean escape the sewer they walk past tv’s that are broadcasting a bulletin about the attack on Becky. The bulletin shows a police sketch of Dean saying that he is wanted and may be armed and dangerous. They return to Becky’s house to get the car and the weapons inside so that they can hunt down the creature. But once there, the police notice them. Sam distracts the police while Dean gets away and eventually gets to the Impala.

Dean, not listening to Sam’s warning, goes into the sewer alone while Sam is at Becky’s house trying to explain everything. Dean gets to the lair and finds Becky tied up and covered in a tarp. She tells him that the creature turned into her before it left. And meanwhile at Becky’s house the imposter Becky knocks out Sam with an empty bottle of beer. It then turns back into Dean and has Sam tied up and is planning on killing him.

Sam fights back, gets out of his bindings and he and the creature fight. Just as the shapeshifter is strangling Sam the real Dean enters. He shoots the creature in the heart with a silver bullet and it lies dead, still looking like Dean.

The Heat Is Off, Where To Next?

The police think that the deceased “Dean Winchester” is the person responsible for Becky’s attack. They also pin the death of her brother’s girlfriend on him. Because of this, they release Zach from custody and the police think that the video footage was tampered with. As the brothers drive along the highway, Dean jokes and says “How many chances am I gonna have to see my own funeral?”

Check out recaps of previous episodes or watch all seasons on Amazon Prime.