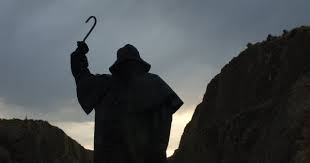 The legend of a “hook man” can date back to roughly the mid 1950’s. It became a little more popular when it was mentioned in the “Dear Abby” advice column in the 1960’s. In fact, I’m sure almost everyone has heard some version of the story. It usually involves a young couple in a car, at night, and a hooded man with, of course, a hook. This episode takes us into another adaptation of the urban legend.

The opening scene is set in Iowa and shows a young couple parked in a secluded, wooded area. The story of Hook Man comes to life when the young man ends up hanging dead, upside down above the car and the young woman screaming.

Winchesters Are On The Job

The newspaper article about the attack by an “invisible man” is what brings the Winchester brothers to town. They pose as fraternity members and question one of the brothers who tells them that the young woman, Lori, was the daughter of a minister. So off to church they go.

After the sermon, they approach Lori to give their condolences and to ask her a few questions. listening to her story, Sam is sure that she is telling the truth. They do some research and discover that a preacher named Jacob Carnes was arrested for murder in 1862. He was so upset about the red light district in town that one night he killed 13 prostitutes. Some were found in their beds while others were found hanging upside down from tree limbs as a warning against sins of the flesh. The preacher had lost his hand in an accident and it was replaced by a silver hook. It all took place on Nine Mile Road, which is by chance the same location that the attack recently happened.

Meanwhile, Lori gets into an argument with her dad when he drops her off back at the sorority house about who she hangs out with. She storms out of the car and up to her room where her roommate is sleeping.

Switch to the Winchesters who are now exploring the area where the attack happened. They are arrested after being found by a police officer.

The brothers are able to get off with a simple fine for Sam due to Dean’s negotiation skills. As they leave the police station they see all of the cops run to their cars. And of course they follow and find themselves driving by the crime scene at the sorority. The chief of police tells her preacher father that they need to question Lori since she was present at both murders.

Figuring It All Out

Sam and Dean sneak their way into the sorority house. It is odd that the ghost of Hook Man would change locations. They typically haunt a specific area. They notice a certain symbol that was painted on the wall under the words. It is the same symbol that was on the silver hook of Jacob Carnes.

Sam and Dean sneak their way into the sorority house. It is odd that the ghost of Hook Man would change locations. They typically haunt a specific area. A certain symbol was also painted on the wall. It is the same symbol that was on the silver hook of Jacob Carnes.

After doing some “homework” as Dean calls it, Sam was able to find a pattern in the attacks. Two previous incidents involved a preacher that was arrested for the crimes. They were men of religion who openly preached against immorality. They think that this time, the ghost is trying to save one person instead of a whole town, and that the poltergeist is haunting a person instead of a place. Lori’s dad.

Dean goes to the cemetery. He is looking for an unmarked grave so that he can dig up the bones, salt them and burn them to get rid of the spirit. He finds a gravestone with the same mysterious symbol. Dean digs up the grave and does his ritual.

Sam goes to keep an eye on Lori at her fathers house. When she spots him, she comes out to talk to him. She says that Sam should run away from her because she feels like she is cursed. Her father had just told her that he is seeing a married woman from their church and Lori can’t understand how he can tell her what is moral when he is doing something so wrong. She hugs Sam and then they kiss. He pulls away just before her dad comes to the door to ask her to come inside.

When they both turn to look at him, a black shadow appears behind him and drags him back into the house. Sam grabs his weapon and rushing inside. He finds the spirit attacking the man and shoots it with his gun filled with rock salt, and then it disappears out a window.

Why Didn’t It Work

Next we are at the hospital where the sherriff is asking Sam some questions. That it is suspicious that he and his brother were always around the crime scenes.

Sam and Dean now think that the spirit of Jacob Carnes is somehow using Lori’s emotions to do the killings. First the boy came on too strong, next her roommate tries to turn her into a party girl, and then she finds out that her father is having an affair with a married woman. But since Dean salted and burned the remains how is it still around?

The hook. If they can find the hook they can stop the hook man. Back to the library.

After some record digging, they find out that the church had reforged the hook turned it into something else. Then off they go to the church to find anything made of silver so that they can burn it.

As they are searching Sam finds Lori in the church praying. She thinks all of the attacks are her fault. Suddenly all of the candles are burned out and the hook man appears. Sam gets thrown around and injured while trying to protect Lori. They can’t understand why the burning didn’t work. It’s at that moment that he notices Lori’s necklace. A silver chain with a silver cross attached. Dean brings it to the basement and burns it with the rest of the silver. First the silver melts away, and then the hook man . He slowly disappears into dust.

Getting ready to leave town Sam says goodbye to Lori and she thanks him for saving her and her father. No kiss goodbye. He gets in the car and they drive away.

For recaps on previous episodes check here.
To watch all seasons of Supernatural, sign up to Amazon Prime here.